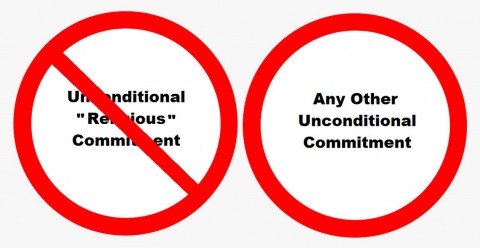 Especially in matters of conscience, leftists are always trying to disqualify the arguments of the other side by calling them “religious.”  Most people know that Judge Amy Coney Barrett has been nominated for the Supreme Court.  Judge Coney is Catholic.  As Senator Dianne Feinstein complained during previous confirmation hearings in 2017, when she was up for the U.S. Court of Appeals, “The dogma lives loudly within you.”  You might have thought the senator was complimenting Judge Barrett’s courage and faith; no, she was insulting them.  She didn’t mean that Judge Barrett made poor arguments, but that whether the judge made good ones or bad didn’t matter.  Since Judge Barrett had been outed as a person of religious faith, her views on any subject whatsoever were automatically disqualified.

But what is religion?  The theologian Richard Niebuhr (not to be confused with his brother Reinhold) defined it as “unconditional commitment.”  In this sense, Mrs. Feinstein is religious too, but she has a different religion.  Suppose she were told that “The dogma lives loudly within you” whenever she recited her unconditional commitment to abortion on demand, or her view that it is in the unconditional interests of mothers to be able to have their children killed.

The important question is not whether one has unconditional commitments – whether or not he knows it, every human does – but what makes some commitments more reasonable than others.  We shouldn’t let the other side say “My reasons count, but yours don’t.”  Let them offer their reasons.  Let us offer ours.  May the better reasons win.

You can’t reach fanatics like Mrs. Feinstein this way, because the whole point of disqualifying the other side’s good reasons is to avoid having to discuss one's own bad reasons.  But you may be able to reach confused people sitting on the fence.