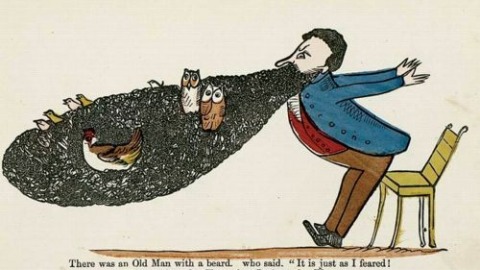 I have a half-baked theory that people in different disciplines are attracted to different kinds of jokes.  Physicists seem to be especially fond of limericks:

There was a young lady from Bright,

Whose speed was much faster than light.

She set out one day

In a relative way,

And came back on the previous night.

Perhaps philosophers too.  For what it’s worth, here is one of my own coinage:

To a Cartesian thinker named Duzz

There came a most fabulous buzz:

"For I not only think,

But I also have thought.

Are there any Thomistic limericks?  There ought to be.  The angelic doctor staunchly approved "words or deeds wherein nothing further is sought than the soul's delight," saying "man's mind would break if its tension were never relaxed."  I know a near-limerick by St. Thomas himself.  In a prayer of thanksgiving he wrote for use in Mass, the middle sentence asks “May [the sacrifice] purify me from sin, do away with my evil desires and passions, bring me charity and patience, humility and obedience, and strengthen me in all virtue.”  The great Catholic apologist, Msgr. Ronald A. Knox, pointed out in 1925 that this uplifting petition has a limerick’s pattern of rhymes -- though not quite a limerick’s rhythm (which would have sounded cheeky in a prayer!):

If you do know any Thomistic limericks, let me know.  There are only two rules:  They have to be funny, and they have to scan.