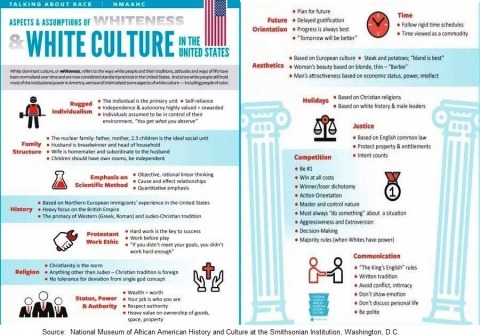 Count on it:  He will try to avoid answering, for if he did, he would expose his supposedly antiracist ideology as insulting to persons of color.  Every color.

So far as I know, the last time anyone holding this noisome ideology dared to give an answer to the question was in 2020, when the Smithsonian Museum of African American History and Culture produced a chart on the “Aspects & Assumptions of Whiteness.”  The release of the chart was a first-class fiasco.  As a depiction of American majority culture -- in both its positive and negative aspects -- it might not have been quite so bad.  People of any race might be participants in the mainline culture.  As a depiction of so called whiteness, it provoked such a backlash that the museum had to withdraw it.

And no wonder.  Among the characteristics the chart used to define whiteness were setting work before play, delaying gratification, practicing courtesy, thinking rationally, and taking time seriously.  Taking this definition together with the demand to try to be less white, it would follow that everyone should try to be lazy, infantile, rude, irrational, and chronically late -- and that black and brown people are like that already, except to the degree that they have succeeded in internalizing whiteness.  The Ku Klux Klan must have jumped for joy at the museum’s implication that Progressive “antiracists” are racists like themselves.