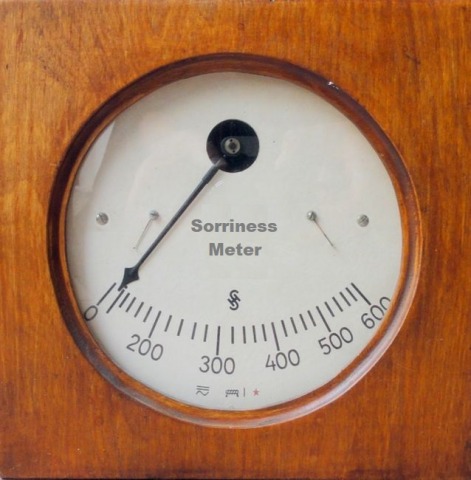 We often feel bad about doing wrong.  That’s good; we should.  However, the association of feelings with conscience tempts us to a big mistake:  We fool ourselves into thinking that conscience nothing but a feeling, rather than an announcement -- “I feel bad” rather than “This is not to be done.”

Consequently, if we don’t feel very bad about something wrong, we may tell ourselves that it’s not very wrong.  Placing all sorts of feelings in the same scale, we then tell ourselves that what is wrong may be done if we have other good feelings about doing it which are strong enough to outweigh the bad one.

This view amounts to thinking that what is wrong isn’t really wrong at all, but merely has the disadvantage of giving us distress, which we may have to be suffered for the sake of something else.

I come across this view even in the writings of thinkers who ought to know better.  One political philosopher – it so happens that he was a long-ago former teacher of mine, who changed careers and became a political advisor – preaches the virtue of what some writers call “ruthlessness” but he prefers to call “toughness.”  In his view, sometimes it is right to do wrong so that good will come.  He calls doing evil merely a “moral cost,” the avoidance of which must be weighed against other objectives.  For sufficient benefit, anything may be done.  If we feel bad, we need to get over it.  And that, he thinks, is virtuous.

If we live this way, we have lost ourselves.