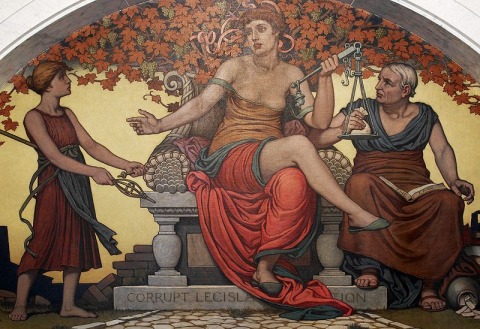 In short, no.  It hopes for self-government; it does not require it.

By giving this answer I’m siding with the classical tradition against some of the early modern revisionists.

John Locke – the revisionist who most strongly influenced our own revolutionaries – thought that the consent of the majority was required by the logic of social contract.  Once a group of people have entered into civil society, “it is necessary the body should move that way whither the greater force carries it, which is the consent of the majority: or else it is impossible it should act or continue one body, one community, which the consent of every individual that united into it, agreed that it should; and so every one is bound by that consent to be concluded by the majority.”

Even for Locke, that means less than one might think.  He believed that if one nation entered into an unjust war against another, those responsible for the aggression would forfeit their natural rights, so that they could be ruled without their consent.

But although the tradition regards consent as deeply important – for human beings were not meant to be ruled as slaves -- it did not regard it as an absolute, because people may sink so low that they lose the moral capacity to govern reasonably.  For example, the people may give their suffrage to whoever promises them the biggest bribes – a thing, by the way, which takes many forms besides the open sale of votes.

Such a people should lose the privilege of choosing their own magistrates – unless the alternative is even worse.  Which it may be.  Unfortunately, in such cases the citizens are usually beyond caring.  “Apathy” is not the cause of this attitude, but merely a name for it.  The root cause is the cardinal vice of sloth – an insufficient love of the good, in this case the common good.

To put it another way, though freedom in the sense of self-government is a precious thing, a worthy aspiration, and a dreadful thing to lose, it is not a natural right.  It comes with a price, which is virtue.

Tomorrow:  Sorrow According to God