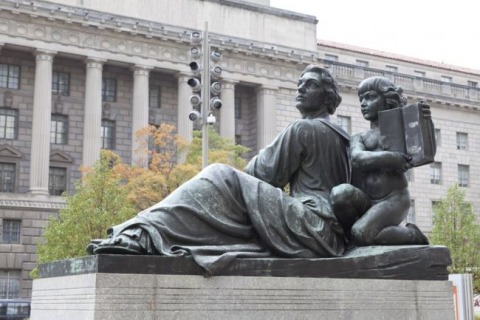 Judges and lawyers tend to think that some systems of absolute commitment and belief are religions and others aren’t.  Anthropologists would laugh at this idea.  In the broad sense, they all are.  The important thing is what kind they are.

Once we see this, we realize that religion in the sense of the Constitution – religion the Free Exercise of which is protected by the First Amendment -- can’t possibly refer to religions in that broad sense.  Why not?  Because in the original meaning of the term, exercising a religion means more than believing in certain things; it also means doing certain things and living in a certain way.  To think that the Framers would have wanted to protect the “exercise” of, say, an assassination cult, is absurd.

The courts are afraid to grasp this nettle.  Bizarrely, they try to construe the meaning of the clause concerning the free exercise of religion without settling the meaning of the words in it – especially that prickly word “religion.”  Their favorite sidestep is to say that law must be “neutral” about religion -- as though one could determine what it means to be neutral about it without knowing what it is.

There is no such thing as neutrality.  No way of dealing with religion is neutral toward religion; every way of dealing with it is some way of dealing with it.  Besides, the Framers plainly didn’t intend neutrality between religion and irreligion anyway.  They guaranteed the free exercise of religion as a protection for religion, and they wanted to protect religion because they thought it was good.  The Supreme Court concedes this fact even in the act of denying it.  In the 1963 case Abington v. Schempp, it oxymoronically remarks that one of the reasons for neutrality lies in the Free Exercise Clause, “which recognizes the value of religious training, teaching and observance.”  Though it seems almost too obvious to point out, to assert the value  of religion is not to endorse neutrality  between religion and irreligion, but to say that religion is better.

But the Framers must have intended the word “religion” to mean something, or the Free Exercise Clause is empty.  So what did they mean by it?  To put it another way, how can we pin down, without being arbitrary, the sense in which the clause uses the term “religion”?  How can we determine which kinds of religion are the kinds to which the Clause refers?

Although most of the Framers were Christians, I think they were using the term “religion” in a broader sense than Christianity – though not infinitely broad.  They were referring to those truths about God that can be ascertained by reason, even if one does not have the additional data of revelation.  And if we look at the way they actually wrote, then I think we can easily find out they thought these truths were.

Consider just the Declaration of Independence.  It speaks of “the laws of nature and nature’s God.”  It says that the “Creator” has endowed us with certain liberties.  And it appeals to “the Supreme Judge of the world,” expressing “firm reliance on the protection of divine Providence.”  These were not empty pieties.  I think it is reasonable to conclude that by religion, the Founders meant something like providential moralistic monotheism with a high view of the human person.  To explain:

By the word providential I mean they believed that God is paying attention.  Ministers invited to address colonial legislatures taught that God would protect the country’s cause against the injustice of England, but only so long as the country itself behaved justly.  Even the Deist, Thomas Jefferson, confessed that he “trembled” to consider how God’s justice would deal with the country in view of the injustice of slavery.  Abraham Lincoln viewed the Declaration’s statements about equality as a promissory note, a public commitment implying a duty to eliminate that evil as quickly as possible.

By the word moralistic I mean they believed that by having created nature, God is also the author of the natural moral law.  It would seem to follow that freely exercising religion – by contrast with freely exercising sham religion and idolatry -- could not include acting in violation of this law.  Writers of the time all conceded that the basic precepts of this law were well summarized by the Ten Commandments.

By the word monotheistic  I mean they believed that there is one God, and only one God, and that this God is not Me, or Us, or the All, but the Creator of myself, of us, and of the All.  Were there more than one God, there might have been multiple, competing creations, or multiple, competing moral laws.  Presumably, then, narcissists, polytheists, pantheists, and atheists might enjoy lots of liberties -- free speech and assembly and so on -- but would not enjoy whatever additional protection the Framers had in mind for religion.

By saying they held a high view of the human person I mean they believed that having made us in His image, the Creator not only laid duties upon us, but gave us rights – and a good thing, because without the liberty to do our duty, how could we do it at all?  These are not rights against God – they are rights against each other.  You may not make me your tool.  You may not deprive me of innocent life, or of the requirements for living humanely.  Nor may you prevent me from serving God Himself.

Whether or not we approve of this approach to religious liberty, I think it is probably what the Framers had in mind.  It does not officially establish any particular religious sect in the sense of giving special legal status to it – but it is anything but religiously neutral.  For it privileges all those sects that are providential, moralistic, and monotheistic with a high view of the human person – and it disprivileges, even though tolerating, the rest.