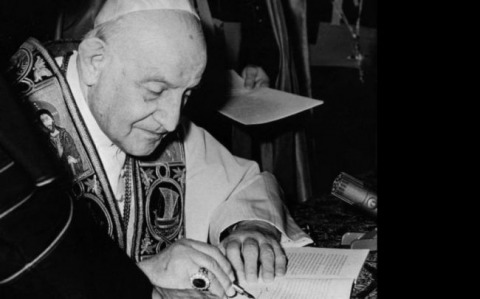 Section 11 of John XXIII’s 1963 encyclical Pacem in Terris declares “We must speak of man's rights.   Man has the right to live.  He has the right to bodily integrity and to the means necessary for the proper development of life, particularly food, clothing, shelter, medical care, rest, and, finally, the necessary social services.  In consequence, he has the right to be looked after in the event of ill health; disability stemming from his work; widowhood; old age; enforced unemployment; or whenever through no fault of his own he is deprived of the means of livelihood.”

I agree.  While reading the encyclical, though, I reflected on the tendency of some Catholic intellectuals to indulge in sloppy thinking about such things.  In particular, most of the rights John XXIII mentions are not claim rights; you may demand that I not murder you, but you may not demand that I buy you a pair of Nikes.  Rather, most of them are aspirational rights.  They mean that we should labor to establish conditions under which every person can best enjoy the sorts of goods that John XXIII mentions.

Yes.  That is right.  That is a moral requirement.  But in thinking of what these conditions might be, it is crucial not to confuse the ends we seek with the means by which we seek them.

Careless thinkers take the idea of a right to food, clothing, shelter, and so on as though it meant a right for the government to give us all these things.  That would be a bad idea.  There are some goods that only the state can provide, such as defending the country and enforcing just laws.  However, the state tends to be a wasteful and shoddy provider of most goods – even the ones that it does have to provide -- and in general, the longer the government has been at something, the more wasteful and shoddy it becomes.  Other goods are generally better provided by other means.

Worse, for the state to supply everything human beings need would require the absorption of the entire economy and every basic social institution into the administration of government.  The price of enforcing a claim right to every human need would be abject tyranny – and we would pay that price for nothing, because the destruction of freedom does not uphold human good but destroys it.  One would think we had learned that by now.

I think John XXIII did understand it.  At the end of the passage he mentioned necessary social services, but you will notice that he did not say that they must all be supplied by the government.

So what are the conditions under which each person can best enjoy the necessary human goods?  I don’t have many answers, and I am short on details.  But though doubtless the state has a role, I am sure that we should think of it last and not first -- and I am sure that before attempting to make things better we should try not to make them worse.

Thinking of the state last rather than first, and trying not to make things worse, probably items like the following would be high on our list.