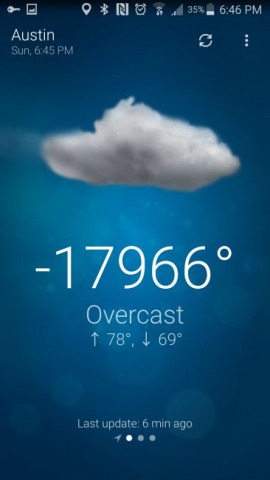 AUSTIN, TEXAS (CMM) – An unexpected summer cold snap shocked the Texas capital yesterday as the mercury plunged to minus 17,966° F.

Nicholas Huffenpuff, director of development for the Climate Research Unit, East Anglia, U.K., warned of “an impending era of global cooling” and said “This is a wake-up call for the human race.”

A dozen environmental organizations including the Terran Planetary Trust, the Burnt Umber Club, People for Giving Ethics the Treatment, and the Weather Liberation Front issued press releases calling for a new climate summit.

House Minority Leader Nancy Pelosi, D-Calif., demanded an immediate tripling of the federal budget to deal with the problem.  Republicans, as usual, had nothing constructive to say.

At the Vatican, an unidentified highly-placed source told reporters that the release of particulate matter into the upper atmosphere, blocking the rays of the sun, “has got to stop” and that an increase in greenhouse gasses is urgently needed to compensate.  “About 50 billion metric tons annually should do it.”

On the street, Austin citizens seemed more puzzled than concerned.  Munching on a taco at an outdoor food wagon, Michael Stubbistoe said “How can it minus 18 thou?  Isn’t that almost, like, absolute zero?”  Michelle Caterwaul, his companion, said “Feels like about 78° to me.  I think someone’s weather app just made a mistake.”