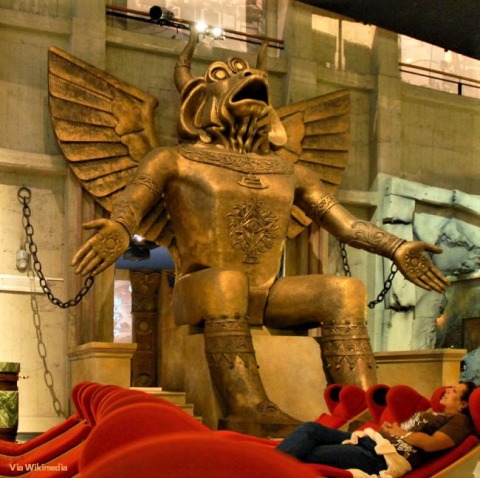 It is commonly said that although devotion to a wicked cause is bad, at least it is good that the devotee is giving himself to “something greater than himself."

I have no interest in defending narcissism.  Closely examined, though, most of the things that are supposed to be greater than the self turn out to be either things less than the self, or else disguises for something about the self.

In the former category, for instance, some people feel small in the face of the Cosmos or the All, and so they worship that.  But although the totality of everything is bigger than the self, it is not greater.  In fact, it is less, for it does not even rise to the level of being a person.  Every single person in the created universe is a higher entity than the universe as a whole.  The mere agglomeration of life and death, animals and stars, harmonicas and pneumonia, pop concerts and yogurt smoothies, love, malice, lies, truths, pimples, illusions, and everything else is not the sort of thing that can love, know, or deliberate.  It doesn’t have hopes, aspirations, or disappointments.  It will never learn your name.  It can’t answer when you speak to it.  It’s not a who, but only a whopping big what.

As to the latter category, there are lots of examples.  How amazing that in adoration of our own reflections, we immolate not only others but ourselves.  The Nation may be merely a many-times-multiplied idol of myself; pleasure, an idol of my senses; fertility, of my animal powers; knowledge, of my intellectual powers; money, of my power; and power, of my will.  A friend has famously been called “another self,” but for this very reason, another person can also be an idol of the self.  Now any of these things may be good in themselves.  Some are very good; it is wonderful to have a friend.  But they are not good when turned into idols.

Needless to say, a good deal of what passes for the worship of God is really idolatry too.  Yet if only He is pursued properly, God may be the only thing truly greater than ourselves that we ever do worship.