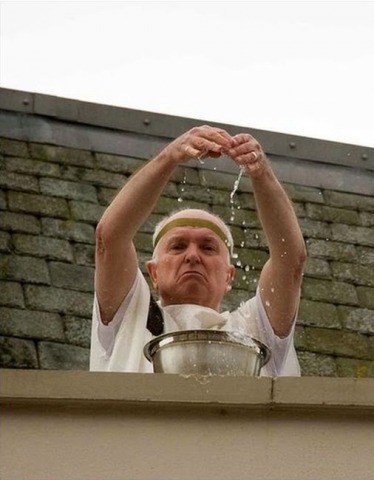 My ethics class was assigned to read a section of one of your books about formal and informal logical fallacies.  I consulted my teacher for clarification of a statement you made after explaining appeal to the excluded middle:  "Unfortunately, entire political and ethical philosophies are based on the illusion that one never really has to take sides."  His advice was to ask you directly.

I was curious as to whether the philosophies you mention would include libertarianism in politics, and relativism in ethics.

A wide variety of ideologies hold that one never has to take sides – in effect, that one can make a decision without making a decision.  This is always fallacious, and usually a fraud.

The most famous examples of a public official pretending that he could make a decision without making a decision was Pontius Pilate, who said to the mob that wanted to crucify Jesus Christ, "I am innocent of this righteous man's blood; see to it yourselves."  In other words, he was claiming that even though he had authorized the execution, he was not taking sides as to whether it should be done.

In the nineteenth century, many people said that they took no position on whether slavery was right, but they did not want to pass a law against it.  To say that masters should be allowed to keep their slaves is, of course, taking a position in favor of the masters.

Libertarians, and also relativists, often claim that they take no ethical position about what to do, but want people to make their own choices.  But of course they do not think people should have the right to make every sort of choice; for example, I don’t know any libertarians or relativists who think people should have the right to shoot convenience store clerks.  Usually, though, they do think people should have the right to enter any sort of sexual arrangement they wish.  Obviously, then, they are making a moral distinction between shooting people and sleeping with them, but the language of liberty obscures this decision.  Notice that I am not saying that people do not have any rights.  However, to recognize which rights are real and which rights are not, one needs a moral philosophy.  There is no way to make this decision neutrally or relativistically.

Some people mistakenly think that if they admit that the law inevitably involves moral judgments, then everything we judge wrong or untrue will have to be illegal.  Surprisingly, this is not the case.  However, the good reasons for not prohibiting everything wrong or untrue are not neutralist; they are themselves moral in nature.

To mention just one:  Truth is good, and promoting truth is right.  However, even when we think we know something true, the best way to promote it, to clarify it, and to discover whether we have made a mistake about it is often to debate, and obviously, one cannot have a debate if the very act of expressing the other opinion is illegal.  In such a case, prohibiting the expression of the opinion we believe to be false would injure the noble cause of truth itself.

The Problem with Liberalism -- and Conservatism