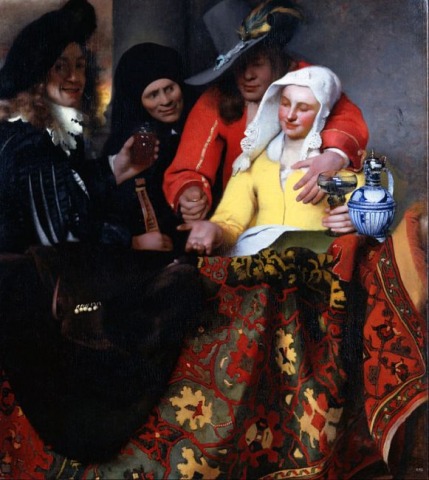 In hell, Francesca da Rimini tells Dante of the moment of her downfall.  She and her brother-in-law Paolo, who were already attracted to each other, were enjoying what used to be called “the near approach of sin” by reading to each other a romance about the adultery of Lancelot and Guinevere.  Upon reaching a certain passage, they went up in flames.  In hell, she mourns, “A pander was that author, and his book!”

It’s interesting to see how difficult some writers and reviewers find it to admit the nature of the sin.  For example, one online discussion page says Francesca and Paolo were “innocently” reading the book together.  I’m surprised that Canto 4 hasn’t yet been purged from our copies of Dante’s Inferno.  Censorious editors sometimes used to expurgate passages in books that were morally objectionable; it was called bowdlerizing.  Now they expurgate or change passages that aren’t objectionable enough.  In one conspicuous example, Hollywood changed the ending of Hawthorne’s Scarlet Letter so that the adulterers enjoy a happy ending.

Francesca was making excuses for herself, but she was also onto something.  Recently an Op-Ed columnist whom I occasionally read in the Wall Street Journal took time off from political commentary to praise the depiction of James Bond, the ultimate objectifier of women, because he is always a “gentleman.”  I suppose this was because the fine fellow dressed so well and drank his gin so elegantly before bedding the women he called by filthy names, or perhaps because Miss Galore stops resisting after he throws her down and forces himself on her.

A few years ago, a book reviewer in the same formerly-staid publication unabashedly praised another work of speculative fiction for having lots of good sex.  What struck me wasn’t simply that prurient matter which would once have been condemned is now treated as delightful.  In our age, one expects that.  No, the surprising thing was that the reviewer presented authorial laziness and crudity as marks of literary skill.

Silly me, I thought laziness and crudity marked lack of skill.  Talented writers depend on plot and character to hold the attention of their readers, not on sheer sexual arousal.  Of course real people, and by extension fictional people, do at times get into bed together!  But if the fact that the characters are sexually involved is necessary to the story, even so the physiological and anatomical details may be left offstage, thank you.

One formula that sells a lot of books is to present the male lead as having a history of indiscriminate and almost anonymous sex, and yet capable of caring for the female lead so deeply that he would die for her after their one-night stand.  “Even after having all those others, I am the one he chose.”  The former specification pleases randy male readers, who put themselves in his place.  The latter pleases female readers, who even in these crass times want their men to be romantic.

No doubt the formula was generated by some marketing algorithm; profit excuses everything.  The authors may also be trying to rationalize things about themselves that they might not wish to disclose.  Or perhaps they are flattering readers of both sexes who have their own excuses to make.

“What’s wrong with that?”  I spoke with one author who defended her practice on grounds that if she didn’t put a lot of gratuitous sex into her novels, publishers wouldn’t buy them.

What’s wrong with it is that stories written to such formulae are vicious lies.  In real life, the two blended character traits are incompatible.  The pretense of their compatibility warps the presentation of reality no less, and no less culpably, than the drug dealer who promises ecstasy from chemical enslavement.  And the authors know what they are doing.