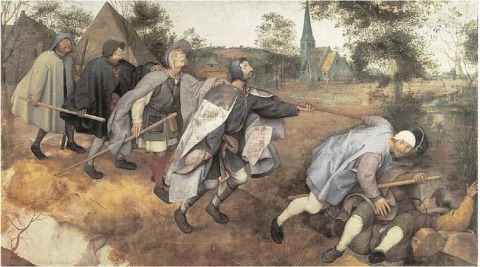 A student in one of my classes insisted one day that when Thomas Aquinas spoke of Divine law, he means “one’s own Divine law”:  Torah for Jews, the Gospel for Christians, Shari’a for Muslims, Thelema for Wiccans, Sheilaism for Sheila, whatever it may be.  She was quite offended by the suggestion that this was not what St. Thomas had in mind.

But it isn’t.  What thinkers like St. Thomas mean by Divine law is whatever really is Divine law.  Whether they are right about the authenticity of Christian Revelation is not a matter of indifference.  If a purported Revelation is not really from God -- if it is merely a product of the human mind that imagines itself to be from God -- then it is wholly incapable of instructing us about matters that transcend what natural reason can work out for itself.  It is worse than a harmless mistake; it is a blind guide.

Now the various purported Revelations -- contrary to popular belief, there aren’t many, for only a few of the world religions claim Divine Revelation in actual historical time -- cannot all be from God, because they say inconsistent things.  There is no “your truth” and “my truth,” for whether we like it or not, we inhabit the same reality.  What then is the Christian judgment?  That both the Old Law, given to the chosen nation, and the New Law, given to the Church, are truly from God, the former being preparatory, the latter being its fulfillment.  It follows that even if Shariʿa may include some good things -- even the pagans, who knew much less, knew some good things -- nevertheless it is a regression from that fulfillment, and it is not truly from God.

If it is really true that the truth about Revelation is simply a matter of fact -- like whether the nucleus of the atom really does contain protons, or whether gravity really is weaker than electromagnetism -- then there is no reason for anyone to be offended by this fact.  Suppose we are at the buffet, and Gertrude is about to dip into the tuna salad.  Felix says, “Better not.  The last three people who ate it got sick.”  Gertrude replies, “Stop judging me!”  Is her response reasonable?  Of course not, because the truth about the tuna salad is not about personal preferences; it is about how things stand in reality.  Even if Felix is mistaken about the tuna salad, he has not offered Gertrude an insult.  In fact, he has exercised concern for her.  She needed to know that the tuna salad might be spoiled.

The hypothetical someone may go on, “But even if we can know a good many things about God by rational inquiry, we cannot know what to make of purported Revelations.”  But we can.  In the first place we can say something negative; any purported Revelation that contradicts what reason can tell us must be false.  For example, we must not believe a religion that denies the unity of God’s wisdom and goodness, any more than we may believe a religion that denies that two things equal to a third thing are equal to each other.  Although these truths of reason are not articles of faith, they are “preambles” to the articles of faith, for as St. Thomas writes, “faith presupposes natural knowledge, even as grace presupposes nature, and perfection supposes something that can be perfected.”

In the second place, even about teachings to which we cannot employ philosophical reasoning, we can employ historical reasoning.  For example, we can ask whether the original witnesses to God’s alleged revelatory deeds are credible.

In the third place, even in cases in which an alleged Revelation goes beyond the matters we could have figured out without it, even so we should expect it, if authentic, to provide deeper insight into these matters, so we can apply a test:  Does it?

Finally, one can put the alleged Revelation to the test.  St. Christian faith forbids “putting God to the test” in the sense of presumption, but in another sense, it encourages it.  The psalmist implores, “taste and see that the Lord is good!”   The Apostle Paul instructs, “Do not despise prophesying, but test everything; hold fast what is good.”

Suppose, then, that I live as though I believe the New Law.  (The alternative is to live as though I don’t.)  I ardently try to follow it; I live, pray, and worship as it directs; I rely utterly on the grace of Christ which is said to make this possible; I seek Him with all my heart; and I say to Him, “If You are real, you may have me” -- what happens?