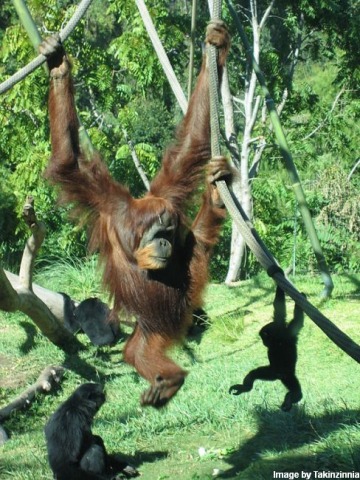 A movement sometimes styled “evolutionary ethics” or “evolutionary psychology” takes as its goal the provision of a naturalistic basis for moral judgments.  This new naturalist fashion comes in several overlapping varieties.  Let us consider the two best-known.

One variety tries to demonstrate that a moral sense has evolved among human beings because it confers a selective advantage.  Consider, for example, the human tendency to help out other people, even at some cost to oneself.  At first it might seem that a genetic predisposition for such behavior could never have evolved by

natural selection because unselfishness spends resources for nothing; every selfless act reduces the likelihood of passing on the genes that have made one act selflessly.  But if the ancestors of human beings already lived nearby to relatives, maybe not.  Under those circumstances, the ones most likely to receive aid would be relatives, and for each degree of relationship, there is a certain likelihood that the relative is carrying a copy of the same gene.  So even though an act of self-sacrifice reduces the likelihood that I will pass on my own copy of the gene, it increases the likelihood that my relatives will pass on theirs.  If my unselfish act helps a sufficient number of such relatives, then the proliferation of the gene in question is assisted even more than it would have been by selfish self-preservation.  This is called “kin selection.”

If kin selection really happens, then it might explain the tendency to help out other people.  It might even explain why we approve of the tendency.  The problem is that it can’t explain whether we ought to approve of it.  After all, the fact that we developed one way rather than another is an accident.  We help our kin; some species eat their kin.  Someone might reply, “That we might have turned out differently is no concern of ours.  The fact is that we didn’t.  Besides, natural selection has determined not only that we are the way we are, but that we’re happy about the way we are.  We don’t need a justification for being pleased!”

Not so fast.  We may be pleased about our tendency to render aid, but we are not so pleased about its limits.  As a matter of fact, many of our tendencies displease us; consider how appalled we are by our propensity for territorial aggression.  Now our tendency to territorial aggression and our propensity to be appalled by it must both belong to the genome.  What sense could there be, then, in judging between them?  Genes provide no basis for judging between gene and gene.  The basis of morality must lie elsewhere.

Another variety of evolutionary ethics tries to show that by considering how we came to be, we will learn more about how we are.  According to this view, Darwinism reveals the universal, persistent features of human nature.  Why it should do so is very strange, because Darwinism is not a predictive theory.  It does not proceed by saying, “According to our models, we should expect human males to be more interested in sexual variety than human females; let’s find out if this is true.”  Rather, it proceeds by saying, “Human males seem to be more interested in sexual variety than human females; let’s cook up some scenarios about how this might have come to pass.”  In other words, the theory discovers nothing.  It depends entirely on what we know (or think we know) already, and proceeds from there to a purely conjectural evolutionary history.

In the truest sense of the word, they are myths -- but with one difference, which is this: the dominant myths of most cultures encourage adherence to cultural norms.  By contrast, the myths of evolutionary ethicists encourage cynicism about them.

New talk: Natural Law and the Revenge of Conscience