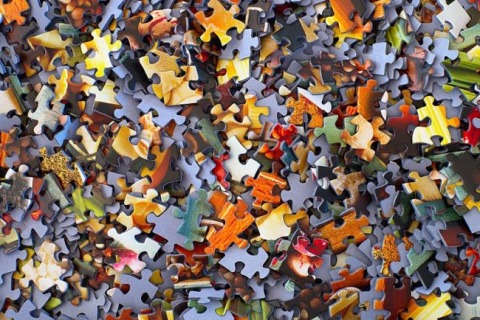 The same fallacy keeps coming up, so let’s try this again.

Darwin is supposed to have shown that order can arise spontaneously from what is not ordered.  The story is that random variations take place, and some of the variations are more successful than others in being passed on to the next generation; therefore new things develop.

●  Natural selection can’t explain preadaptation – the development and persistence of things millions of years before they have any adaptive value -- like brightly colored blossoms before there are pollinators to attract.

●  It can’t explain certain human attributes such as the almost universal belief in God, the perception of beauty in music, or the search for the purpose of human life, because these things have no adaptive value whatsoever.

●  And it can’t explain irreducible ensembles of features – things that must all be present before something works but which could not have developed one at a time, because none of them has any adaptive value until they are all present, each in its right place, all working together.

Notice that I haven’t yet said anything about God.  An intelligent person should acknowledge that even if there were no God and the causes of things were entirely material, as he thinks, even so natural selection couldn’t be the only cause of new species.

But suppose it were.  Would the naturalist then have demonstrated that order can arise spontaneously from disorder?

No, not even then.  Why not?  Because the contingent emergence of order at one level presupposes prior order at another level.  Just to forestall misunderstanding, I should add that I am referring to priority in the sequence of causes, not necessarily priority in time.

●  If I shake a box of puzzle pieces long enough, the pieces might fall into place to make a picture, but not if their shapes are random.  The orderly way things fall into place presupposes the prior order of how the different shapes fit together.

●  An ant hill behaves as though someone were directing it, but not if the ants emit and respond to pheromones at random.  The orderly behavior of the anthill presupposes the prior order of how pheromones are used to send signals.

●  What programmers call an evolutionary algorithm may produce interesting and novel phenomena, but someone has to write the algorithm, because random code accomplishes nothing.  The orderly result of executing the algorithm presupposes the prior order of the algorithm itself.

Besides, there would have to be a highly organized device on which the algorithm could be executed, and that device would need its own code – so it would need still more prior order.  Call that a computer with an operating system.

The argument we have been developing works very much like what have traditionally been called the arguments to a First Mover and to a First Cause.  For contingent order presupposes prior order; if the prior order is contingent, then it too presupposes prior order; if that prior order is contingent, then so does it.  On and on it goes.  But since we cannot allow an infinite regress, there must be something that starts all this order going – a First Principle of Order -- an absolute starting point that is not contingent – something that exists necessarily.

And that – as Thomas Aquinas would say -- is what we call God.