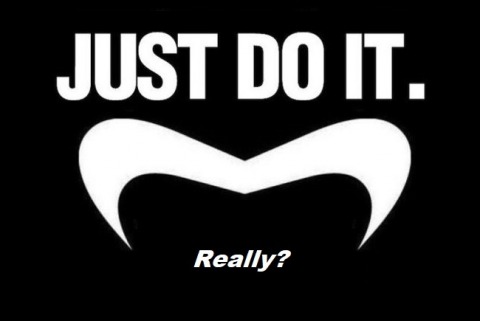 People are attracted to some awfully bad rules of life.  Maybe you’ve noticed.

Since we are a rational species, and most people aren’t idiots, how do bad rules of life become so popular?

Case in point:  The phenomenally successful Nike advertising slogan, "Just do it."

A marketing expert who writes that he was in on its coining opines that a slogan “must evoke transcendent qualities of human soulfulness.  And to do that it has to express deep insight into its unique purpose in the world.”

Don’t expect clear speech from an advertiser.  I translate that warm bath of self-congratulatory words as meaning, “The slogan must exploit powerful motives on the part of the consumer.  And it has to connect these motives somehow with the product.”

We knew that already.

More interesting is how the originator of the slogan “Just do it” actually came up with it.  When asked, he said he “took inspiration from the last words of a convicted murderer, Gary Gilmore, who said ‘Let’s do it.’”

But that still doesn’t explain why Nike thought the slogan would sell shoes.

To me the matter seems pretty simple.

We are attracted to a bad rule of life when it has two things going for it:  First, there have to be certain isolated truths that make it superficially plausible.  Second, we have to want to believe it.

So – part one -- what makes “Just do it” superficially plausible?  The fact that in at least two kinds of situations, we really shouldn’t think too hard before acting.

The first kind is the carpe diem situation:  Don’t overanalyze, just hit the ball.  Don’t obsess over whether you can win the race, just run.  Seize the day!  This is the kind of thought that Nike was trying to evoke.

The second kind is moral conduct under temptation:  Don’t worry about what will happen if you don’t lie, just don’t.  Don’t give thought to the next door lady’s charms, just be faithful to your wife.  Do the right thing!  I gravely doubt that Nike was even thinking about this one; in fact, the company would have preferred that consumers not think about it.

But from the testimonies some people post to the internet about how following the Nike slogan changed their lives, “just doing it” without deliberation solves every problem and applies to every life decision.  Relationships.  Travel.  Finances.  And, I guess, being executed.

So – part two -- what makes people want to believe in such a foolish rule of life?  The fact that it provides a convenient excuse for doing things we want to do, shouldn’t do, and wouldn’t do if we did deliberate properly.

Another Nike advertisement said, “We are hedonists.”  That was less successful, because it was less flattering.  “Just do it” gives us an excuse to be hedonists by flattering us with the image of a high and lofty spirit.

Don’t worry that you’re already sloshed, just have another drink.  Don’t think about whether you should be sleeping with strangers, just put the moves on her.  Don’t obsess about whether you can afford the purchase, just swipe the damn card.

Don’t consider whether doing this is wise.  Don’t worry about whether it’s right.  Don’t fret about what you will think of yourself for having done it.

Advertisers and pimps understand these things.