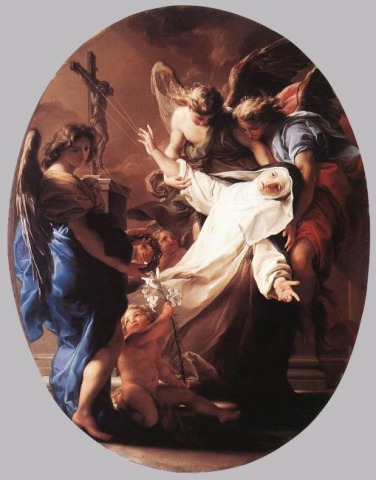 What would you say is the single most compelling, prima facie argument for God?

The argument I find most compelling is sometimes called the Argument from Desire.

At the very beginning of the Summa Theologiae, St. Thomas says that “To know that God exists in a general and confused way is implanted in us by nature, inasmuch as God is man’s beatitude.”  What does this mean?  We naturally long for beatitude, for that complete and utter happiness which would leave nothing further to be desired.  But “nature makes nothing in vain” – thirst is quenched by water, hunger is filled by food, and in general, for every basic desire there is something that can satisfy it.  So there must be Something that could satisfy the longing for beatitude.  That Something, that supremely loveable object of the longing for beatitude, is God.

It follows that if the longing for beatitude really does have an object, it must lie not within nature, but beyond it.

Taken together, the various arguments for the existence of God tell us quite a bit about Him:  For example, that He is the First Cause of all things and the Source of all Good, and that there is only one of Him.

That isn’t enough, is it?  Not even all the philosophical arguments together can tell us that He has come among us, shared our burdens, and atoned for us.  For that, we must consult testimony of witnesses -- which is to say, the Gospels.

Even so, the philosophical arguments do faith a great service.  They are preambles to faith, because they show it to be reasonable to believe in the sort of God of whose deeds the Gospels teach.

The emeritus Pope has remarked that Christians used to say to pagans that the God whom we worship is not some god of myth, like theirs, but the God of whom the philosophers spoke -- but whom they did not worship.

They knew Him only as a theorem.  We know Him as Immanuel, God with us.