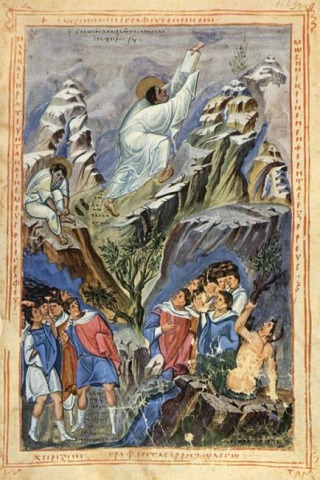 Thanks for your Commentary on Thomas Aquinas's Treatise on Law.  I know you touched on “theonomy” (as in Old Testament civil law for today) in there, but is there any more you can say about it?  It's becoming very popular in [certain Protestant circles].”

That’s a good question, but I think we are using the same word for very different things.  Let’s see if we can get this straightened out.

I’ve edited out the names of specific groups and individuals, but in the ultraconservative Calvinist circles you mention, “theonomy” is a buzzword for applying Old Testament law to contemporary society, just as you say.  This is a mistake, because Old Testament law was never intended as a blueprint for all societies.  In fact, it wasn’t even meant to be a permanent blueprint for the Hebrew people; it was a civil code, yes, but also a schoolmaster or teaching tool.

Christ pointed out, for example, that the Old Testament law merely limited revenge by means of the precept “An eye for an eye and a tooth for a tooth.”  This was good, but God’s ultimate intention was to put an end to revenge.  Thus, the underlying moral principles of Old Testament law, such as punishment for those who do evil and honor for those who do well, are universally valid, and these are precepts of the natural law.  But the implementation of these precepts in the Old Testament is not universally valid.

Some of the “theonomists” you mention might agree with me in part, because they say they do not want to apply Old Testament law literally, but only to apply what they call “the equity of the law,” meaning just those underlying principles I have mentioned.  If this approach to Old Testament law were fully implemented, then I think it would flower in a complete doctrine of natural law.  This hasn’t happened, because, unfortunately, many of these “theonomists” reject natural law altogether.  They argue that because human nature is fallen, no one can know anything about right and wrong except from the Bible.

This denial of natural law in favor of the Bible is not only mistaken, but it is contradicted by the Bible itself, which makes clear that although our nature is fallen, it is not destroyed, and that although the “law written on the heart” may be overwritten, it cannot be erased.  By the way, Calvin agreed with me about this; he wrote that the view that our nature has been destroyed is not Christian, but Manichean.

When I used the term “theonomy” I was using it in a different sense – in the sense of John Paul II, who wrote in Veritas Splendor (“The Splendor of Truth”) as follows.  Notice that he modifies the term, making it “participated” economy.  In part, this echoed Thomas Aquinas, who called the natural law the mode in which the mind of the rational creature “participates” in the law in the mind of God.  It was also a response to those who mistakenly think obedience to God is a kind of “heteronomy,” something imposed on man from outside.  Thus the Pope writes,

“Others speak, and rightly so, of theonomy, or participated theonomy, since man's free obedience to God's law effectively implies that human reason and human will participate in God's wisdom and providence. By forbidding man to ‘eat of the tree of the knowledge of good and evil’, God makes it clear that man does not originally possess such ‘knowledge’ as something properly his own, but only participates in it by the light of natural reason and of Divine Revelation, which manifest to him the requirements and the promptings of eternal wisdom. Law must therefore be considered an expression of divine wisdom: by submitting to the law, freedom submits to the truth of creation. Consequently one must acknowledge in the freedom of the human person the image and the nearness of God, who is present in all (cf. Eph 4:6). But one must likewise acknowledge the majesty of the God of the universe and revere the holiness of the law of God, who is infinitely transcendent: Deus semper maior.”

Here is what I wrote in part of my book that you must have read:

“Law is an extrinsic principle of acts because it is promulgated by God, and in this sense comes from outside us.  However, in another sense it is inside us, for it finds an echo in our own created being; natural law is the ‘participation’ of the rational creature in the eternal law.  For this reason, obedience to God’s law in no way diminishes human freedom. On the contrary, being made in His image, we are most true to ourselves precisely when we are most true to Him.  This also shows that when Immanuel Kant distinguished between autonomy, or self-legislation, and heteronomy, or passive subjection to the law of another, he was posing a false alternative. To use an expression of John Paul II, the human sort of freedom is a third kind of thing, a ‘participated theonomy.’”

“The doctrine of the inviolability of conscience is often confused with the doctrine of moral autonomy.  In reality, no two things could be further apart.  According to those who hold the former doctrine, my freedom lies in my willing participation in a law that I did not make, but that I see with my mind to be right.  But those who hold the latter view believe that I myself originate the law.  Consequently, they view my freedom as consent to nothing but my own will.  A person who holds the doctrine of the inviolability of conscience recognizes the dreadful possibility of an erring conscience, but a person who holds the doctrine of moral autonomy cannot see how the individual could really err, as he originates the law that he obeys; there is no ‘external’ standard by which he could be held to be mistaken.  To him it seems that obedience to God is just as much slavery as obedience to the lowest earthly tyrant, for in both cases I submit to something that is alien to myself.

“Those words, ‘external’ and ‘alien,’ are the crux. Is God really alien?  Is His standard really external?  According to St. Thomas, no, because my whole God-given being resonates with God inwardly. Natural law is the mode in which I share in the eternal law as a rational creature.

But some of us think John Paul II was trying to speak to a third group as well.  By using the term “theonomy,” but modifying it, he may have been engaging in a cautious, respectful bit of ecumenical diplomacy with Protestants, inviting them to join in the ongoing dialogue about natural law.

The Church has wanted that to happen for a long, long time.