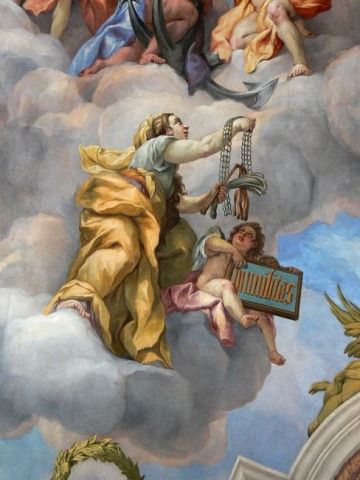 I am trying to figure out what to make of the claim that Christian beliefs are insufficiently humble.  When I was in school my physics teacher, an atheist, said that atheists are more humble than Christians because they affirm that human beings are nothing special.  More recently, in chatting with friends, I hear the opinion that believing in the natural law is proud, apparently because humility would require treating all moral perspectives the same.  I say “apparently” because the argument seems to turn into word salad.

I would like to know your thoughts on the matter.

I would say the solution to the problem is that virtues and vices, such as humility and pride, are character traits.  Unlike truth and falsity, they are properties of persons, not of propositions.

We rightly associate atheism with pride because atheism provides a person with a motive to put himself in God’s place.  I think a person has to work mighty hard in order to tell himself there is no God – I did.  Even so, pride and humility are in the hearts of those who hold and reject the beliefs, not in the beliefs themselves.  Our ancient Adversary, who is the supreme example of pride, is no atheist.  St. James remarks with ironic praise, “You believe that God is one; you do well.  Even the demons believe -- and shudder.”

In the same way, we rightly associate Christianity with humility because Christianity teaches humility.  Humility wasn’t a pagan virtue; it was from Christianity that your atheist teacher learned of it.  But consider Jesus’ parable about the two men praying in the temple.  The conventionally religious man prayed, “God, I thank you that I am not like other men, extortioners, unjust, adulterers, or even like this tax collector.  I fast twice a week, I give tithes of all that I get.”  The tax collector stood at a distance.  He wouldn’t even lift up his eyes to heaven.  Instead he beat his breast, saying, “God, be merciful to me a sinner!”  Christ’s comment was “I tell you, this man went down to his house justified rather than the other; for everyone who exalts himself will be humbled, but he who humbles himself will be exalted.”

There may be diverse motives for holding almost any belief.  If someone believes in the natural law because he submits to a moral order that he did not invent, he may be humble --  but if he believes in it because he thinks he lives up to it perfectly, he is proud.  If he tries to treat people respectfully even when their perspectives are mistaken, he may be humble – but if he says “all perspectives are equally valid” because he wants to do just as he pleases, he is proud.  If he says human beings are “nothing special” because he does not want to vaunt himself, he may be may be humble (even though mistaken) -- but if he says it so that he can treat other people as dirt, he is full of pride.