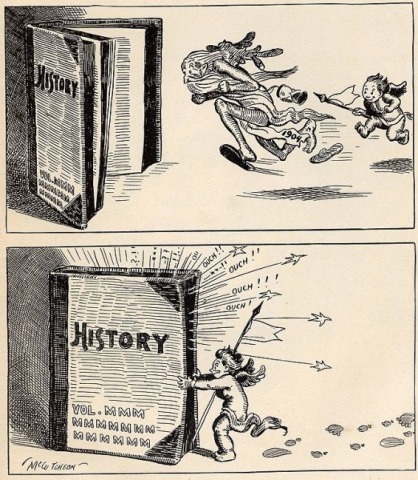 Hilaire Belloc’s occasional dourness conceals an underlying cheerfulness – for he believed in the chastening grace of God.  This is from his reflection “On New Years and New Moons”:

I say that the New Year is a whimsy; an imaginary; a nothing.  It is not there at all.  You may receive it with all manner of ceremonies; you may treat it with solemn ritual; but all that is part of the myth-making of man.  It is indeed part of reality that The Seasons do actually pass and return in a circle, a ring whence, if you like, the word “annual.” The days will actually grow longer after Christmas (thank heaven), and then they will get shorter again after Goodwood.  There is a rhythm about all this which I do not pretend to understand but which is part of reality; and we human beings, bound in by reality and confined to it until we get away to better things (for I mean by “reality” all the business of this world), must set boundaries so as to know how far we have got along the round of the works and the days.

For the moment we have fixed on a certain day, the first of January, which in its turn is not there.  There is no January.  It is one more of those imaginations, without which in our weakness we cannot live.  I would rather believe in a Janus with two faces (for I have met such people) than in a mere abstraction like January.

A New Year has this useful thing about it, whether it be Mohammedan, Hebrew, Julian, Gregorian, Chinese, or Choctaw: it makes man remember and regret his follies and his sins.  If we did not become familiar and conversant with these ultimate companions we should make very poor wayfaring with them at the end.  And as, before the end, we lose all other friends and fellowships, let us at least be conversant with these and learn to know them each by name and to grasp them familiarly by the hand, turning to the right and saying, “Good-morning, my dear Folly Number 8!  Let us talk over the matters that concern us.” …
I say that at the New Year we enter into preparatory companionship with our follies and our sins.  Wherefore idiots on this occasion make good resolutions.