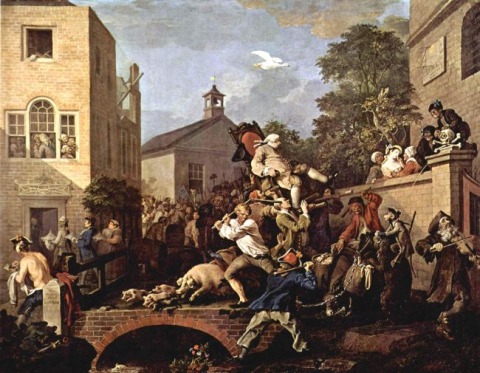 True, elites cannot rule without some compliance on the part of the people.  On the other hand, popular compliance can be manipulated.

True, elites are not always able to replace themselves with persons who see things just as they do.  On the other hand, they may be able to keep that up for quite a while.

We should hope that ours do.

Let’s return to the beginning.  The people cannot rule by themselves.

Just because they cannot rule by themselves, the people cannot peacefully dislodge a hostile elite unless they have allies within the elite.  They might – though in our age I doubt it -- dislodge them by rioting and assassination instead, but it is hard to imagine even rioters who don’t also need allies.  Besides, that sort of revolt would only put in place an elite of ex-rioters and assassins.  It hardly seems a good trade.

William F. Buckley famously said “I should sooner live in a society governed by the first two thousand names in the Boston telephone directory than in a society governed by the two thousand faculty members of Harvard University.”  He explained that he did not hold lightly the brainpower, knowledge, generosity, or even affability of the Harvard faculty, but that he feared intellectual arrogance, a characteristic that distinguishes any university that “refuses to accept any common premise.”

I sympathize.  Whatever their good qualities, most of our present elites have nothing but disdain for the lives, hopes, and common premises of ordinary people – the “deplorables” who “cling to their guns and religion,” as a pair of recent despisers have described them.  But Mr. Buckley was using hyperbole to make a point.  If the first two thousand people in the telephone directory really could govern all by themselves, that might be good.  They can't.  Not in any society.

Whither populism?  Our goal should not be that the first two thousand in the telephone directory would rule, but that our elites would respect and honor the aspirations of that two thousand rather than despising them as yokels.

In times like these, respect of the elites for the aspirations of the people may seem even more utopian than literal rule by the people.  But the times were not always like this.  They will not always be like this.