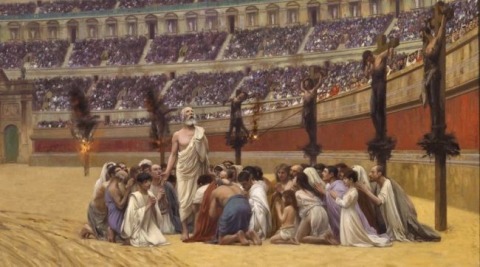 I am drastically shortening the following letter from a reader.

My email may seem absurd, but I feel that things have reached such a low point in this country that the worst thing to do is nothing.  It seems to me that to do what is right, America needs to change the First Amendment, and I have written a possible alternative.  The Constitution would publicly affirm the existence and attributes of God as they can be known by natural reason.  Any religion which affirmed them would be allowed free expression.  Any religion which did not affirm them would be liable to being suppressed, prohibited, and criminalized.

I emphasize what can be known about God by reasoning.  I don’t exclude people from governing who affirm God but reject revelation.  That would be throwing away some of the nation’s human capital.

What do you think?

I understand your despondency about the moral and spiritual condition of the country.  Although I strongly disagree with your proposal, it deserves a serious reply.  Let’s see what I can do.

As a matter of history, it seems likely that what the Founders meant by the term “religion,” in the Free Exercise and Establishment Clauses, wasn’t any old thing, but moralistic monotheism, with a Ten Commandments view of morality, a providential view of God, and a high view of the dignity of the human person.  This outlook is plainly on display in the Declaration of Independence, and yes, the Founders endorsed it because they thought it could be confirmed by natural reason, even apart from revelation.  So I think it is already implicit in the Religion Clauses, however obscured it may have become by subsequent judicial interpretation.

I will go further still:  It would been helpful, and saved a great deal of confusion, if the ringing affirmations about God which we find in the Declaration of Independence had been placed in the Preamble to the Constitution too.  He is our Creator and Protector, the author of natural law, and the source of our rights and our duties.

Up to this point, I am with you, but now our paths part sharply.

For, also as a matter of history, the Founders didn’t intend to open the dark gate to official suppression of other sorts of creeds and cults -- and they were right not to open it.  It is one thing to say that moralistic monotheism should enjoy some special recognition or privilege over and above the protections that all systems of belief receive through the Free Speech and Assembly Clauses.  It is quite another to say that systems of belief outside of it should be denied freedom of speech and assembly, or that we should round up their adherents and put them in jail.

We insist on religious liberty not only so that those who know God can worship Him, but also so that those who do not know Him can discover Him.  Without freedom to seek Him, it is much less likely that they would find Him.  Let us punish people for actual crimes, not thought crimes.  We don’t need to imitate the persecutors.

Besides, faith, by its nature, cannot be coerced.  I like to quote St. Hilary of Poitiers, who wrote, “God does not want an unwilling obedience.”  What coercion actually accomplishes is simulated faith.  The early Puritan writer Roger Williams put it tersely:  “The sword breeds a nation of hypocrites.”  You can convert, or you can coerce; you can’t convert by coercion.

Consider too how the highly detailed list of proscribed sects in your proposal (I’ve omitted them from this post) encourages gaming the system.  Adherents of the sects that you want to prohibit could evade proscription simply by changing their names.

Finally, I think that your proposal would come at the worst possible time (not that I think there is a right time).  After two generations of hostility to faith, a hostility disguised as “neutrality,” the Supreme Court has recently begun inching back toward a saner view of the Religion Clauses, one closer to that of the Constitutional draftsman.  This development needs to continue.  Why risk derailing it?  For even if I agreed with your suggestion in other respects, so sweeping a proposal would be less likely to produce a Constitutional amendment than a civil war.  There is no telling which side would win -- but the tendency of civil war is to unhinge the consciences of both sides.  So it might be almost as bad to win as to lose.

As James Madison wrote, “The danger of disturbing the public tranquility by interesting too strongly the public passions, is a still more serious objection against a frequent reference of constitutional questions to the decision of the whole society …. the experiments are of too ticklish a nature to be unnecessarily multiplied.”

I hope I’ve persuaded you.