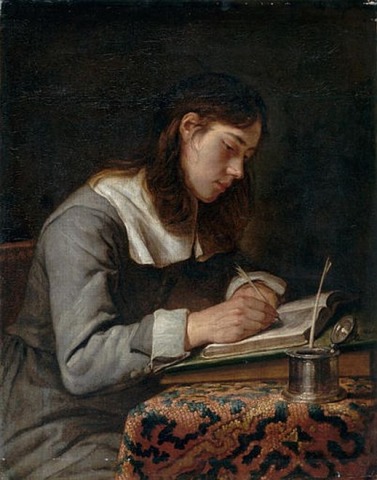 If any Underground Thomists are in Tucson on the evening of Thursday, February 26, you may be interested in an autobiographical talk I’ve been asked to give at a Veritas Forum at the University of Arizona.  The title is “Why I Am Not an Atheist.”

But Mondays are always reserved for letters from students, and here we go.

I am a writer.  I've enjoyed writing stories since third grade, and have embraced the word "writer" as my label.  Lately I've been feeling out of touch with God.  I know that we shouldn't rely totally on feelings, but I do believe they are there for a reason.  I wonder if I have this feeling because I've been focusing too much on writing instead of Him.  I really want to follow His will, but there are two problems:  I don't know what His will is, and I'm afraid that it might require me to give up writing.  I don't know if I'd be able to do that.  I love writing too much.  I'm trying to convince myself that God's will for my life is to write many short stories to my heart's content, and that He'd use them for His will even though they aren't Christian in nature (not to say that they're bad, or offensive, they're just secular, pure and simple).

I guess what I'm really trying to ask is this:  Would God require us to give up talents, skills, and likes that He created us with, for His overall plan for humanity? I worry that by telling myself "No," I'm just giving myself the answer that I want to hear -- but is it true?

It's hard to imagine God telling you not to write, since you are so sure that His calling for you is "Write!"  To endow a person with talents, skills, and likings that direct him strongly toward an honorable kind of work is a way of calling him.  Why else would He give you these things?  Unless there is something you're not telling me, why agonize?

So often people expect God's "call" to be an audible voice, perhaps from a convenient burning bush.  Could that be your problem?  Not that He has never used such methods!  But He seems to reserve them for extraordinary callings that require extraordinary methods of announcement.  There is no particular reason to think that He would create and adorn you with temperament and talents that pushed you so strongly toward writing, then tell you "Now be an accountant."  Besides, there isn't any rule that says that an audible voice is more likely to be God's than the "voice" of the skills He has given you.  You'll always need discernment.  Even if an audible voice did tell you to be an accountant, you'd have to ask whether it was God or just your iPod.

Or could your worry be that your stories are "secular," as you call them?  Let's think about that, because the term can mean a lot of different things.  Sometimes when people call something secular, they mean that it reflects an alienated view of the world according to which there is no God, no meaning, and no hope.  I don't think that's what you have in mind -- at least I hope not. I think you mean only that your stories don't have explicitly religious themes -- that they aren't about things like worship, conversion, or Being Left Behind.  My response is: Don't worry about it. Suppose you were a painter.  Would God tell you to stop painting because your canvasses showed starry skies instead of scenes from the Bible? Or suppose you were an architect. Would He tell you to give up your profession because you happened to build homes instead of churches?  Don't the heavens proclaim His glory? Didn't He live for 30 years in an ordinary home?

I think it's the same with the writing of stories. Everything that is good and well done ultimately points to Him; by faithfully reflecting the realities of the human heart, you honor the Creator of the heart. Many a story that doesn't mention Christ is implicitly more Christian than many a story that does.  Laughter pleases Him too; we don't always have to be serious, like beasts of burden. I cannot believe that hilarity wasn't one of His creations, and I revel in the comedies of P.G. Wodehouse.  My advice is that if your stories are dull, shoddy, careless, corrupting, or ordained for dishonorable purposes, then you should doubt your calling.  Not otherwise.

There are two complications.  Here is the first.  In the strictest sense of the term, a calling is something permanent.  The calling to marriage is like that; God never calls a husband to abandon his wife.  So is the calling to the priesthood, or to the consecrated religious life.  Writing isn't that kind of calling.  It might please your Creator for you to take up another kind of work some day, just as He called upon Moses to stop herding his father-in-law's sheep.  I can't tell you that won't happen.  I can’t tell you that it won’t require the last ounce of your strength.  What I can tell you is that if it does happen, it won't happen in the way that you fear.  You won’t be thrown away.  God won't give you contradictory guidance, He won't put the temperament and talents He has given you to waste, and He is not displeased for you to follow the guidance He is giving you now.  You can't do tomorrow's duty today; you can only do today's.

The second complication -- as I mentioned – is that there may be something you're not telling me.  Perhaps you don't really like writing, but just like the idea of writing.  Perhaps you aren't really talented at it, but just like the idea of being talented.  Perhaps your stories aren't as innocent as you say they are.  I'm not particularly worried, mind you.  Good writers are often filled with unnecessary self-doubts; nothing in your letter suggests that you aren't being honest with yourself.  Just be sure that you are!

The first step in doing that is to get to the bottom of the other problem you mention.  You say you feel "out of touch" with God, and you wonder whether your writing is to blame.  It shouldn't be, and yet it could be.  The reason is this:  It isn't the obviously bad things in life that we're tempted to turn into idols, but the good and godly ones.  I mentioned before that you should write "as unto the Lord."  The question is:  Is that the way that you do it?  So much depends on the rest of your life.  Worship often; pray constantly; practice the action of charity; and avoid what you know to be sin.  Yes, love and enjoy your craft!  But if you love the beauty of words, that is all the more reason to adore the Word in whom all Story has its source.

Tomorrow:  Nothing Is Neutral